a restaurant, a cuisine, the pierre & jean spirit

Thus, to pay tribute to them, Jacques Lemeloise’s grand-father and father came together under the roof of an 18th century wine storehouse in Chagny.

A story of chefs and star-ratings that began in 1902. Pierre Lameloise had a remarkable career after his apprenticeship, firstly working in Paris with Drouant, Larue, Ledoyen and Lapérouse, then in London at the Savoy in Auguste Escoffier’s team. In 1921 Pierre and his wife Denise took over the Hôtel du Commerce, a 15th century coaching inn located at 36 place d’Armes in Chagny. He received his first Michelin star in 1925, then a second in 1931. Pierre Lameloise died prematurely in 1936 at the age of 47.

In 1944 Jean Lameloise, Pierre’s son, took over the management of the family establishment with his wife Simone.They received a Michelin star in 1951. Jean and Simone undertook major works in the 1960s and the Hôtel du Commerce was renamed «LAMELOISE».

It was in 1971, at the age of 24, that Jacques returned with Nicole, his wife, to Chagny after ten years’ training in top restaurants. This chef with a passion for food rapidly imposed his style of cuisine. In 1974 Jacques Lameloise received a second Michelin star. By 1979 his art had reached its full maturity and he received his third Michelin star, making him the youngest 3-star chef in France.

Born of a desire to enable more people to appreciate the values of carefully prepared cuisine within easy reach, the Pierre & Jean restaurant, underpinned by the skills and know-how of this great family of chefs, has a new tandem, Eric Pras and Frédéric Lamy.

A kitchen open to the dining room ... and that's the whole spirit of Pierre & Jean. As soon as you enter in the restaurant, the scent of homemade cuisine tickles your nostrils while the team is ready behind the stove to prepare the meal for you. The meal time promises to be warm and friendly in a classic setting with "a hint of salt". No secrets here, except maybe the chef's recipes!
In summer, have lunch or dinner in the garden, terrace or grass for other happy moments.

The offer is on purpose reduced and changes regularly, depending on supplies, the seasonality of products, under the watchful eye of Chef Pras at Lameloise. 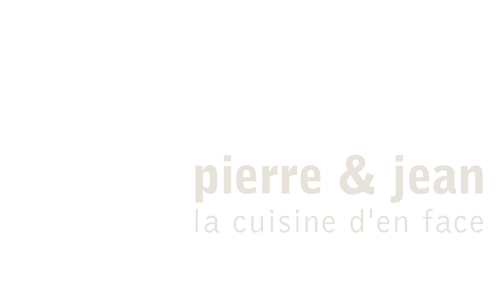 While the transmission between Jacques Lameloise & Eric Pras had just taken on its full dimension, the project for the Pierre & Jean restaurant ... just a few steps from 36 place d'Armes in Chagny was born.
New challenge: to offer neat, local cuisine, with quality products, at accessible prices in a new space located just opposite Lameloise.